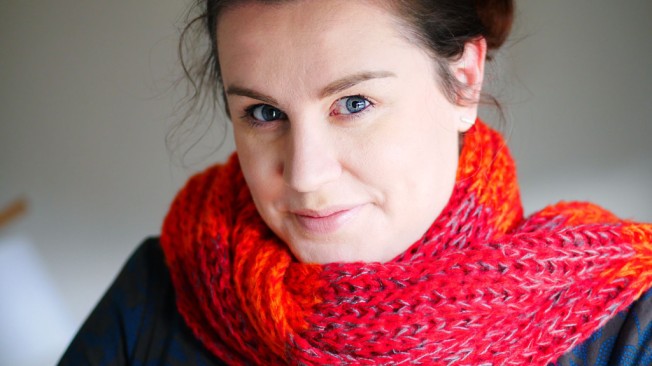 Anna Spargo-Ryan is an Australian novelist, journalist, digital strategist, content creator and social mediaist (it’s a word now, deal with it). She has written for The Guardian, Overland, Kill Your Darlings, The Saturday Paper and many more literary and journalistical (another totally realz word) organisations. Anna originally hails from Adelaide and now lives in Melbourne. When she isn’t writing Anna enjoys Balfour’s custard tarts, oak trees and going to the beach.

Hello from the beach, an ant just bit my bottom pic.twitter.com/CkreFXorNy

Even before leaving school, Anna’s literary gravitas was recognised. Her English teachers sent her to writing workshops and camps to develop her skills…. Unlike my senior high school English teacher who told me it seemed like I had no grasp of the English language and can go suck a dog’s fart. It turns out that Anna’s English teachers were right as The Monthly has now described her as ‘a writer to watch.‘

In January of 2016 Anna shot to international fame with a Facebook post that went viral. In it she took on journalist James Adonis who had indicated that people were faking mental illnesses and how employees should single them out in a now infamous piece for The Sydney Morning Herald.

Evidently 2016 was a busy year for Anna with the release of her debut novel, The Paper House, through Pan Macmillan. Later in the same year she received The Horne Prize for her essay The Suicide Gene. Both works were highly regarded by critics. 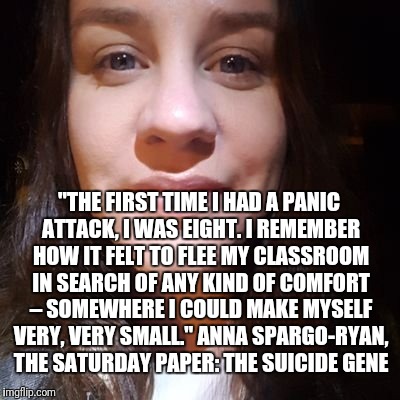 Praise has followed Anna into 2017 with the release of her second novel, The Gulf, also published through Pan Macmillan. Anna’s writing has been touted as visceral and emotive. The Guardian has described her as ‘a sharp observer of human emotion.’

On top of these already impressive credentials Anna has also worked her digital strategist and content creation magic for giants such as Bauer Media, Telstra, Kmart, Deakin University and the AFL to name but a few. Her English teachers really were right about her, she’s ace and very talented.

Learn more about me here.

Read about my views on being a dyslexic writer here. 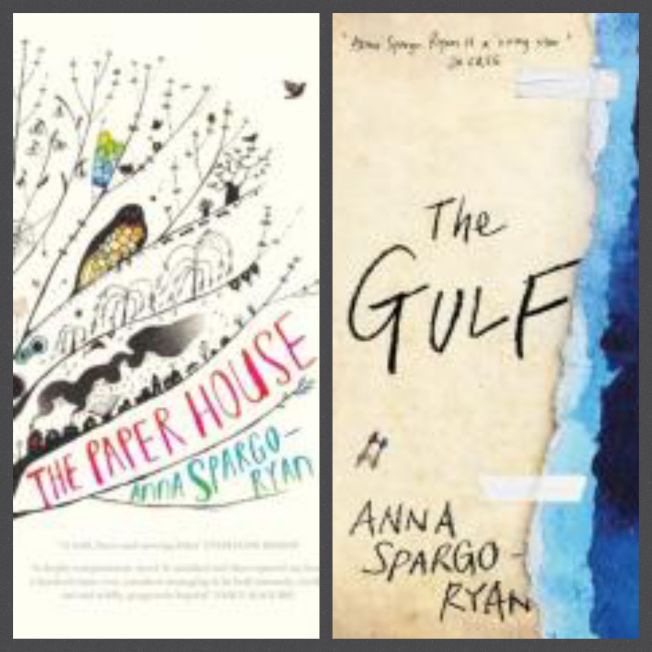 *non-Australian followers, this is not what you think it is 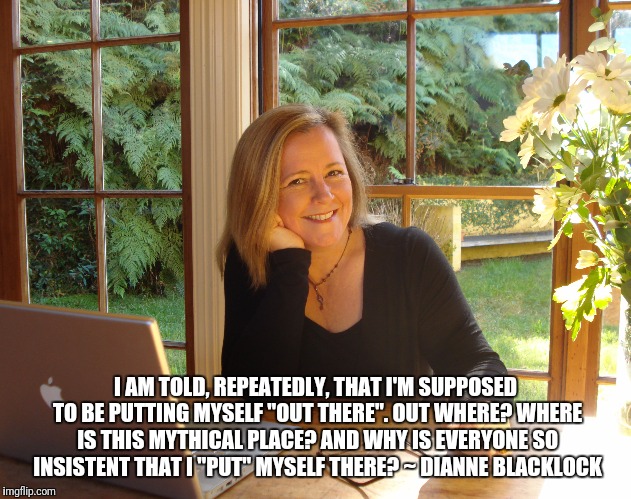 In a Robinpedia first, I’m adding the mother of an already existing Robinpediaed entity. Please set your hands to applause for Australian author Dianne Blacklock.

Dianne Blacklock is a Sydney writer and has published 9 books through Pan Macmillan. She writes about people and relationships. She also hosts “A Conversation With…” authors series on her blog. Authors such as Liane Moriarty and the Robinpediaed Lisa Heidke have been interviewed in this series.

If you’re a slush pile swimmer in need of inspiration look no further than Dianne Blacklock. At 39 her unsolicited manuscript was fished out of the bog of eternal slush at Pan Macmillan. A year later she had a book contract. It can happen. You can break out of the slush. It’s too late for me, but just keep swimming. SAVE YOURSELVES!

I was lucky enough to have Dianne Blacklock as a special guest star at Emily Maguire’s Year of the Novel through the New South Wales Writers’ Centre. She is incredibly generous with sharing her words of wisdom with aspiring writers. Dianne Blacklock emphasised that whatever approach you wanted to take to writing you would find experts who vehemently disagreed with it…. BUT you would also find experts that agreed with you, so just do what works for you. If it works, it’s right.
Apparently when not writing Dianne Blacklock has a love of cleaning and inventing chores. And she’s got enough to go around. You get a chore, you get a chore, everybody gets a chore…. So…. like…. don’t visit when she’s not writing?
Find Dianne Blacklock’s website here.

If you have any info that you believe would enhance this entry, please leave it in the comment section.

Read about my thoughts on being a dyslexic writer here. 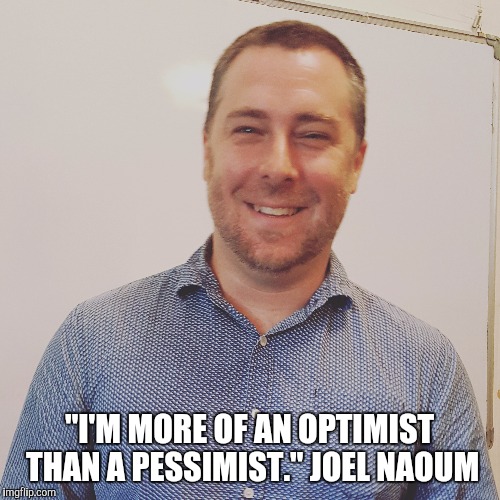 Who is Joel Naoum? A man, yes. A human being, yes. A carbon based lifeform, yes. But is there more to him than being a mamal and living on Earth? The answer will surprise you, for it is yes.

Naoum began his life as child to Australian writer Dianne Blacklock (can’t find her on Wikipedia so rest assured she will be getting her very own Robinpedia entry). Sitting by her side he absorbed a love of books but as a social butterfly he could not see fit to cocoon his radiance in the solitary world of authorship. One year his mother took him to the Sydney Writers’ Festival  (why yes I am a volunteer, how can I help) and he found that despite being introduced to cool authors such Andy Griffiths and Garth Nix he was himself more attracted to the lurking representatives from the publishing houses. A fire was ignited within the belly of the young Naoum and he set his heart upon joining the publishing industry.

Pan MacMillan gave Naoum his first job in the publishing sphere. He both horrified and delighted his interviewer by telling her about his love of the new technology ebooks (he’s older than he looks, it was new back then). She loved his innovative approach, she did not so much love that he somehow had an illegal electronic copy of one of Pan MacMillan’s titles. He did not know it was illegal prior to this point and does not recommend it as an interview strategy.  Fortunately he still got the job.

Not only did Naoum get the job but he thrived. He was awarded the Unwin Fellowship and was able to travel to the UK and learn all about the innovative things UK publishers were doing in epublishing. He spent three months in the UK learning the secret business of a variety of publishing houses.

After his fellowship ended and Naoum returned to Australia he was selected to head up Pan MacMillan’s digital first imprint, Momentum. Their original goal was to still be able to publish mid list authors that there was no longer shelf space for after the collapse of Boarders. Because they love authors and stuff. The focus of Momentum changed as they came to realise that the ebooks that sold well were more genre based such as romance, crime and spec fic, not so much literary Australiana. Just quietly, e also love their self help and parenting books. In order to make money the imprint had to switch from its original purpose. Over a 5 year period Momentum put out 450 titles.

Naoum, still committed to the digital world has now setup his own company, Critical Mass. This is mainly a self-publishing consultancy firm that helps self published authors get in touch with editors, designers, and gives marketing advice. He will also help people looking to traditional publish polish their pitches. He is there for you.

In addition to this Critical Mass, Naoum has designed a course for The New South Wales Writers’ Centre, where he is a board member, that actually publishes student’s work. It is open to people with completed and edited manuscripts. Naoum then takes students through cover design, formating, connecting with a distributor, and finally, actually hitting publish and getting a print copy into their hands.

Find out more about Robinpedia here. 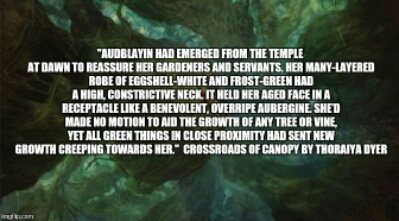 Thoraiya Dyer is an Australian writer of speculative fiction and archer. She has won several awards for her short stories and is well regarded by commissioning editors who describe her as an absolute pleasure to work with. She is so well regarded within the speculative fiction community that I was completely surprised, yet delighted to discover that she did not have a Wikipedia entry yet, so it is with extra pleasure that I write this entry.

Thoraiya has published more short stories and novellas than you can poke a stick at and collected four Aurelius awards and three Ditmar awards in the process. In 2017 she released her first full length novel, Crossroads of Canopy book 1 of The Titan’sForest Trilogy, through Pan MacMillan.

And can I just say a big personal thank you to Thoraiya Dyer for turning her hand to long-form epic fantasy. For those fellow readers waiting in the wilderness for Patrick Rothfuss’s third installment of The Kingkiller Chronicles, we now have something to get us through those lonely nights, Crossroads of Canopy by Thoraiya Dyer. I fully expect to see some Kvothe and Unar fan fic soon. It’ll be pretty racey. PRoth, you now have my full permission to take until this trilogy is wrapped up to get part three of yours out. I’m not entirely sure if your publisher or other fans will accept my authority but it’s worth a try…. My own three kids don’t accept it and the oldest one is only five. Sigh.

Getting back to Thoraiya Dyer and #robinpedia, Book 1 of The Titan’s Forest Trilogy is phenomenal. It has the scope of Feist with the deft touch of Marillier. It truly is a master work, one we’ve been lacking for so long. I was like a kid again whilst reading Crossroads, with that same level of curiosity and excitement. And the characters from different areas actually genuinely look different. They’re not all just super sexy humans. I honestly didn’t even realise how much I’d missed truly great epic fantasy until I read this.

When she’s not writing Thoraiya is shooting things with an arrow. She loves the standing stillness and focus of target archery as it helps clear her mind. Fellow writers looking for a new approach to mindfulness might do well to try archery out. It has certainly worked wonders for Thoraiya who has an absolutely prolific output. 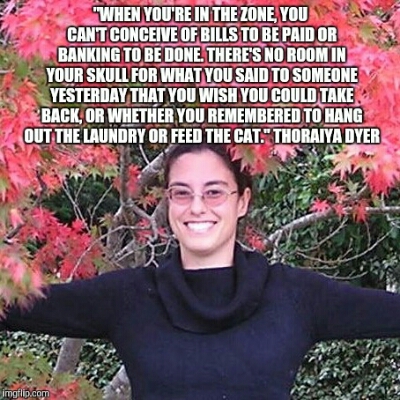 If you have any information you would like added to this entry please leave it in the comment section.

P.S. Yes, I’m already fully aware that I am dyslexic.