What would Tara do?

It’s no secret that I’ve got a bit of a Lady Writer Crush on Tara Moss. Of late I’ve been using expressions like, “I’m channeling my inner Moss,” and, “I totally Mossed it,” much to my friends’ amusement. And I’ll be honest, it has caught on with them. Anytime we appear particularly serene and confident when under stress we’ll say, “I see you Mossing it.” If one of us is flipping out we’ll say, “What would Tara do? Put on her lipstick and pull herself together.” I’ve actually started wearing red lipstick now. I had to go emergency purchase some the morning of Literary Speed Dating in order to “Get on Moss of it.” I’m now wearing my red lippy all over the place. This has come as a shock to people who have known me for years and are more familiar with me channeling my inner Woolf rather than Moss. 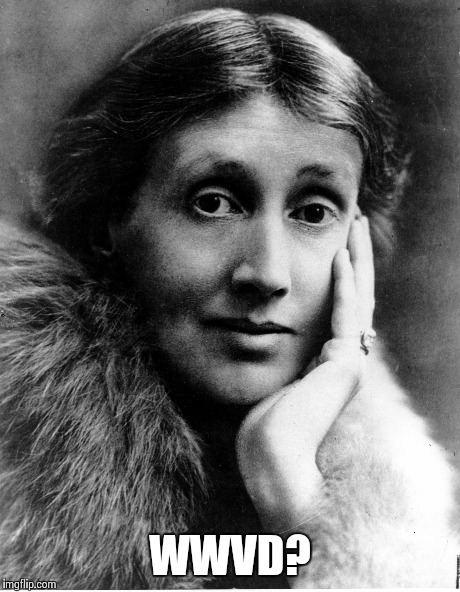 What would Virginia do?

But you know what, it works. I feel much more confident with my lip mask on. So I drink a cup of tea, put on my lipstick and high heels, and I’m ready to face the day. However,  I’ll let you in on a little secret, lean in closer, closer,  I have to italics it because I haven’t let anybody else in on the secret,  shhhhh, Tara Moss isn’t the only person I channel. Gasp. Yup. I’m a bit of a Lady Writer Crush (LWC) hussy (LWCS???). Although Tara Moss is my go to at the moment I can’t solve all the world’s problems through giving it “a red hot Moss.” So here are some more LWC that you can channel.

What would Emily Maguire do? She’d put on her pajamas and pull herself apart. Because sometimes you just need to get comfy in your sauce stained PJs to truly become one with yourself. If she was scared of something she’d go out and confront it. She’d research it, interview it, visit it, she’d get that business all taken care of because knowledge and understanding is power. Then she’d go home and get comfy. Because pyjamas are awesome.

What would Kate Forsyth do? Plaster on a smile, sip some champagne and hug her many, many books, published in many, many countries. When you’re as internationally recognised as Kate Forsyth not much phases you, so just drink champers and be fab. We all need to just shake it off with a champagne and a smile every now and then. If I was to channel pre published Kate Forsyth (translation: broke) To “Forsyth it” would mean to be focused, devoted and don’t allow for distractions or detractions. Choose your priorities and go with that. If that means skipping a few meals to do a writing course then so be it. So really,  however you “Forsyth it,” pre published or internationally celebrated,  you’ll be doing something pretty amazing. Self belief is key.

What would Nakkiah Lui do? No idea, she’s a bit like the Spanish Inquisition,  nobody expects them. The only thing I know is that she’ll challenge, she’ll be unique, she’ll probably swear and she’ll definitely make you laugh. So if you want to “Lui it” you’ll need to be able to think on your feet and always do the unexpected and BE the unexpected.

What would Margo Lanagan do? Something so profoundly brilliant that it beggars belief and then be self deprecating about it. Modesty thy name is Margo Lanagan… Ok, I haven’t channeled my inner Lanagan yet, because I haven’t written anything as brilliant as her yet, but I look forward to the day I do… because then I’ll be smug as hell instead of self deprecating.

What would Hannah Kent do? Start a bidding war over her first novel… haven’t channeled her yet either… sad face.

What would Anita Heiss do? Be ground breaking,  brilliant,  devoted and still be family oriented… I hope my daughter channels her inner Heiss, Mummy will always be here, please don’t forget me.

What would Pamela Freeman do? Say something sassy as hell and make everyone laugh, then follow it up with a ridiculously insightful comment. Pamela is cheeky, she’s funny, she’s willing to tease her writer friends on panels just to make them laugh and she follows it up with intellectual insights. In short, she’s as close as you can get to a Terry Pratchett witch in real life. So just go say what you want, write what you want, be who you want, that’s what Pamela would do, that’s why she crosses genres and age groups in her writing.

So who are you going to channel today?