Today on Facebook, Mia Freedman posted a picture of herself wearing some seriously enormous panties with the caption, “You know you’re not on holidays anymore when you’re wearing your fat-sucking undies.” 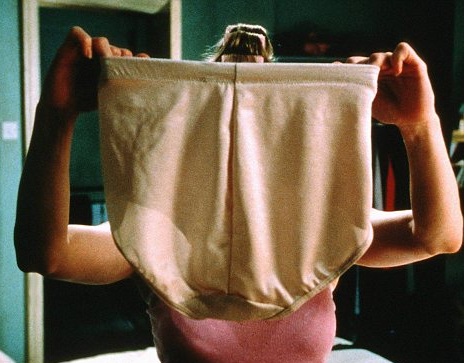 We’ve all been there.

Some decaying, vain, creature asked which brands worked best, okay it was me – please feel free to post suggestions in the comments, many complimented her on keeping it real, and then there were the sayers of nay. How dare this woman promote being happy with yourself yet wear gut suckers from time to time? How dare she be skinnier than some people and wear control tops? The nerve! Even comments about how she was supposed to be smart so should know better. Because a big beautiful brain, being slimmer than some other people, and possessing a belief that you should be kind to yourself apparently means that you are free from any kind of insecurity.

It really made me think. Mainly because prior to three kids I was a size 6, but now I’m a size 8. People probably look at me and think, skinny bitch, where as I look at myself and go, ‘Fuck I’m fat.’ Now I’m not an actress, or a model, I’m not paid squillions of dollars for my appearance, so I don’t have that burning, monetary/career motivation to get myself back into shape. I still want to, and yes, after three kids, I still can get back into shape. Admittedly the last two were twins born through emergency c-section so that does complicate matters, but they are a year old now so really, enough is enough when it comes to excuses. Three weeks after my daughter I was into all of my old clothes, including the skinny jeans, and three months later I had the ab definition back. Sure add some time for twins and some time for the big C rather than the big V, but let’s be honest, I’m ‘fat’ because of me at this point not the babies. (And yes it is a pet peeve of mine when people BLAME their children for weight gain, career loss, etc. Kids don’t need that kind of guilt thrust on them.) And yes, there are other people out there larger than me, but that doesn’t make me feel less fat, just as me being slimmer than them probably doesn’t make them feel any fatter or slimmer. Because our body image is to do with the messages we tell ourselves in our heads, not what other people drive down our throats.

So when I saw people tearing down Ms Freedman I was slightly appalled. She’s a journalist, sure a high profile one that does TV spots, but by and large she gets to hide behind her computer in yoga pants using her brain not her appearance to get her point across. Today she had to shoot a commercial, so today she wore some gut suckers. If I had to shoot a commercial I bet I’d be wearing gut suckers, thigh suckers, push up bra, a whole heap of makeup and enough hairspray to kill a small planet. None of these things do I wear on a daily basis but I would feel the need for a public appearance. Well I assume I would, I have never shot a commercial, or TV spot. And guess what, I’d admit to it too. Why? Because I’m real and it’d be honest to let people know that I’d put my best gut forward. So to Ms Freedman, I applaud you. Thanks for showing us that everyone has issues and everyone gussies themselves up. That those perfect images and as perfect as we think and that it’s okay to want to look your best. And that wanting to look your best doesn’t mean that you suddenly don’t want people to be happy with themselves, and that it doesn’t mean that you think everyone has to do it, that are emotions about ourselves run far deeper than our thoughts about others.

So I’m off to do some Yoga, and when I go out to lunch with my girlies on Saturday I shall wear my gut suckers with pride. And if my girlies wear them too, then fine, if they don’t, that’s fine too. Lipstick, sparkly shoes, push up bras, perfume, or absolutely nothing. I don’t care, wear what you want to wear to make you feel good!