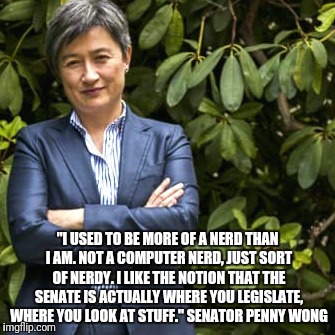 Penny Wong in a blue suit with arms crossed standing in front of green foliage. Quote: I used to be more of a nerd than I am. Not a computer nerd, just sort of nerdy. I like the notion that the Senate is actually where you legislate, where you look at stuff.

Captain, oh my Captain. How I wish thee were a minister and not a senator so that thee could become Prime Minister of Australia. Senator Wong is quite simply the best person in Australian politics. She can manage to give the vibe of an eye roll without being so petty as to resort to an eye roll. She is one of Australia’s most popular politicians and it’s because of two simple things, which should be common in politics but are unfortunately rare, she’s firm but also fair.

In 2016 Senator Brandis tried to language police Senator Wong, trying to shame her for using standard expressions instead of formal English at all time, she responded with this ripper, ‘Would you just like to be pompous for the whole day, or only this question?’ And I swear a bit of excited wee snuck out when I heard that. In 2018 when Michaelia Cash, our Minister for Women FFS, decided to randomly slur all the younger women in Opposition Leader Bill Shorten’s office rather than answer a question posed to her. Senator Wong wasn’t even in the hearing, heard about the outrageous slurs against women being made be our Minister for Women, rocked up to the hearing, demanded an apology, refused to accept Michaelia Cash dodging the issue, and indeed got an apology. I know who our real Minister for Women is, Senator Bloody Wong. Furthermore, in 2011 when David Bushby meowed at her during Senate she gave him such an unimpressed look that I thought he might just whither and die. Later he claimed he wasn’t being a sexist fool, yeah right mate you meow at men all the time, but Senator Wong was having none of his shit. She responded, which was important for all women, because it is past time for us to ignore these constant, sexist microaggressions and time for them to stop. #timesup. Senator Wong said, “It is just extraordinary. The blokes are allowed to yell but if a woman stands her ground, you want to make that kind of comment. It’s not schoolyard politics, mate.”

When she first assumed office in 2002 Senator Wong was one of only a handful of women in higher political positions and certainly the only gay Asian female candidate. In fact she was the first Asian born member of an Australian cabinet, the second openly gay member and the first openly gay female member. Things have changed in terms of diversity thanks to Senator Wong’s impressive lead but we still have a long way to go. In 2013 Senator Wong was appointed as Leader of the Government in the Senate and was the first woman to hold that position. Late in the same year when Labor lost government she was appointed as the Leader of the Opposition in the Senate, she is the first woman to hold this position also.

Senator Wong was appointed Minister for Climate Change in 2007. She made significant advances in funding renewable energy, in particular solar and wind power. She also helped to develope the government’s emissions trading scheme under the Rudd government which was to significantly reduce our greenhouse emissions. In 2010 she was appointed as the Finance Minister and helped develop Australia’s budgets during the Global Financial Crisis. Australia has been praised as standing relatively secure during this time. During this time Wong most notably implemented a policy to ensure women are considered for senior positions in both the government and corporations. She truly is our Minister for Women and I cannot think of a better politician to discuss on International Women’s Day. On top of this Wong was instrumental in changing Labor’s policy in regards to Same Sex Marriage. Labor had initially opposed SSM but through work by Penny Wong and other members of Labor the policy was changed and they began to actively campaign for a change in Australian marriage laws. From January 9th 2018 on SSM has been legalised in Australia.

In 1997 Pauline Hanson released Pauline Hanson: The Truth in which she claimed that by 2050 Australia would be run by an Asian, lesbian Cyborg… named Poona Li Hung. She actually named it! Let’s not unpack all of that right now because this is Senator Wong’s entry not Pauline Hanson’s. But Australia is more than happy to drop the cyborg bit and bring the date forward for Penny Wong. Please become our supreme ruler, we love you. 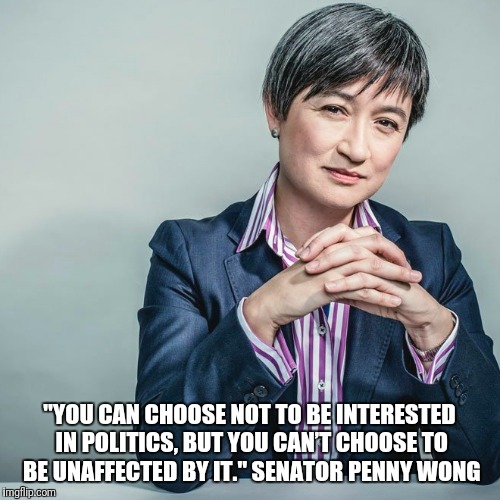 Senator Wong sitting in front of a grey background with her hands folded in front of her. Soft but cheeky smile. Wearing blue suit with purple and white vertical stripe top. Quote: You can choose not to be interested in politics, but you can’t choose to be unaffected by it.

Read about my views on being a dyslexic writer here.

Read my profiles of the Australian Book Industry here.